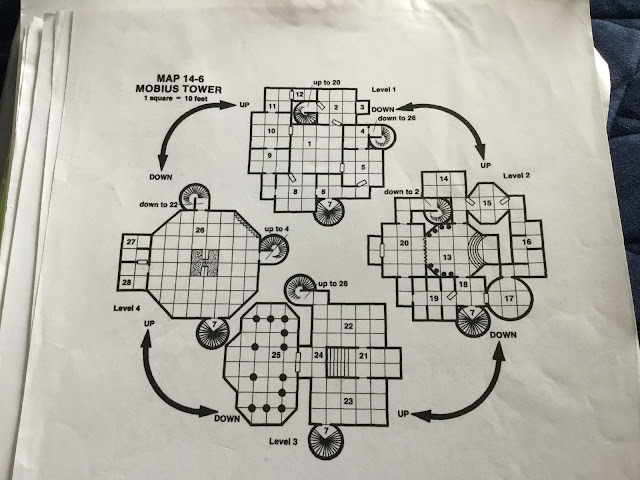 Sir Blanque - swordsman and handsome, dashing noble half mer-person Marion - stabby stabby dagger specialist; Nihrain who currently carries the Runestaff Destiny - Menastrai sorceress covertly raised on Melnibone Bomilcar - Weeping Waste nomad from a chieftain's family Campaign narrative The four adventurers are currently part of the way through a series of side quests. They need to find six inscribed plates that generate holographic images of minarets. Once they have these, they are to add them to a central large holographic image of a floating citadel, which is missing six of its minarets. This will help them summon the Sphere of Power of The Martek, which will destroy the rampaging Efreet Prince Khalitharius. Not so simple, then. At least they already have one of the minarets, and they now go into a side chapel that shows another plate and its associated minaret sitting on the pillow of a sleeping woman wearing loose silken robes that don't cover very much. The teleport plat
Post a comment
Read more 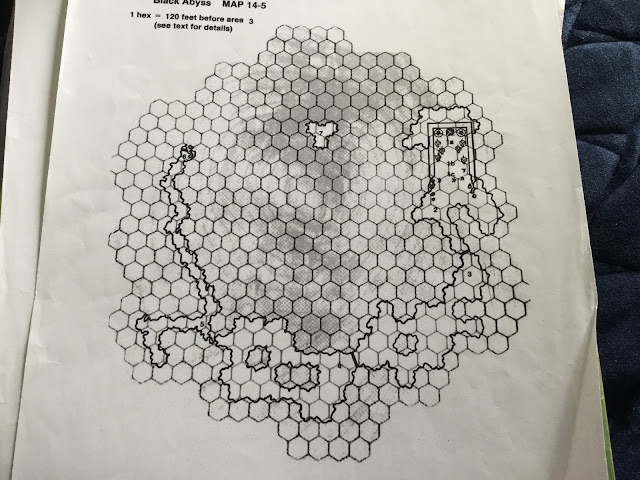 Sir Blanque - swordsman and handsome, dashing noble half mer-person Marion - stabby stabby dagger specialist; Nihrain who currently carries the Runestaff Destiny - Menastrai sorceress covertly raised on Melnibone Bomilcar - Weeping Waste nomad from a chieftain's family Campaign narrative The crystal cathedral in which the characters now find themselves has six side chapels, each of which holds another hologram depicting a different place/time of some sort. They know that they need to find six miniature holograms of minarets to complete the main artwork in the centre of the cathedral, so it looks as though it's time for six side quests. It doesn't really matter which is first, but after taking a look at them all, they realise that each has what looks like a teleport station set into the floor underneath the hologram that represents what is presumaby its destination. It doesn't really matter which one they take first, since they'll need to follow them all. They decide
Post a comment
Read more 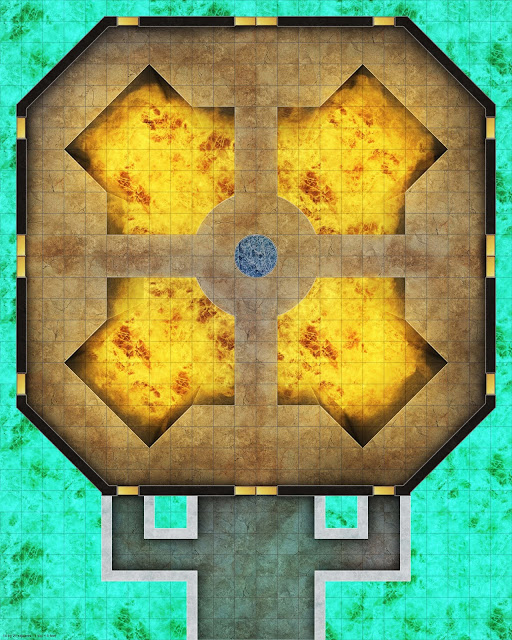 Sir Blanque - swordsman and handsome, dashing noble half mer-person Marion - stabby stabby dagger specialist; Nihrain who currently carries the Runestaff Destiny - Menastrai sorceress covertly raised on Melnibone Bomilcar - Weeping Waste nomad from a chieftain's family Campaign Narrative The four characters now have all five Star Gems, the last of which is supposed to be placed in the appropriate indentation in the obelisk at the centre of the deserted city. The obelisk has been giving off a rather lovely chiming sound, almost like a crystalline heartbeat, starting from the point the group retrieved the final gem from the Temple of Ra. When they do this, crystal pillars at various strategic locations around the city begin to emit an accompanying chime; according to an inscription on the obelisk, the players now have to touch one of the Star Gems against a pillar. Doing so summons a teleport disk that takes them to a beautiful garden beneath a glorious crystalline dome - obviously a
Post a comment
Read more

Some Julie Guthrie figures, plus a few others. 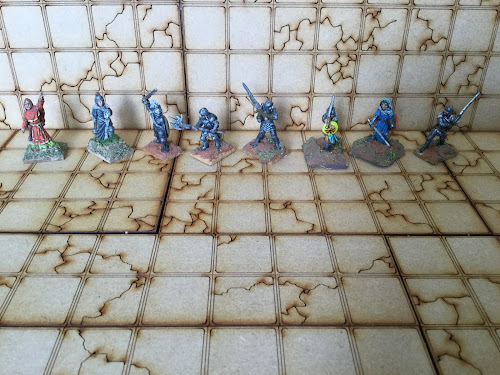 I hit a nice patch on the refurbishment of my old fantasy figures, this time by delving into some of the groups I based as command stands for Greyhawk Wars using Tactica a very long time ago. Many of them were by the talented Julie Guthrie: Her figures were rather delicate but nicely sculpted, and often slightly quirky (e.g. left-handed, like the halberdier in the photo). As part of the re-touch, I experimented a little with a small box of fluorescent paints I bought to help with things like lanterns and fires. The white that came in the set is actually a very light silver, perfect for highlighting armour and weapons; I hope it brings out the details in these. I used the fluorescent red on the Cleric figure at the far left; it's not so bright, but it did make his robes quite vivid, so I am quite pleased with these paints. The second batch is a bit of a mix. The leftmost two as you look at it are old Citadel figures from just when the original Warhammer  RPG was released. You can se
Post a comment
Read more 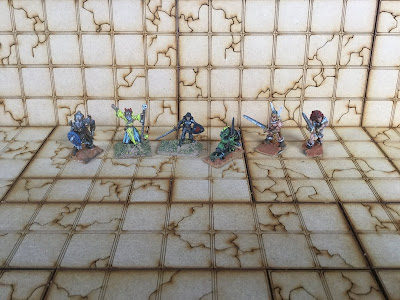 In between times, I've been catching up on various re-painting jobs. Here are some people: These are all rather old - probably 1980s. I can't remember even who made most of them, although I do think the one third from the left is the foot figure of a Ral Partha set of a woman riding a dragon - I gave that to a very good friend who loves dragons, but kept the one on foot. I'm quite enjoying repurposing them...
2 comments
Read more 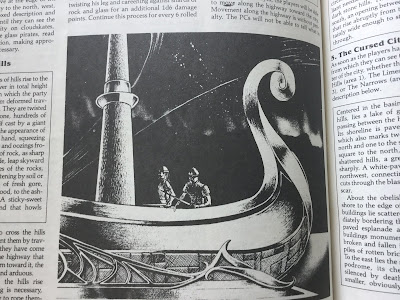 Sir Blanque - swordsman and handsome, dashing noble half mer-person Marion - stabby stabby dagger specialist; Nihrain who currently carries the Runestaff Destiny - Menastrai sorceress covertly raised on Melnibone Bomilcar - Weeping Waste nomad from a chieftain's family Campaign Narrative The four friends can now get back into their flying reed boats and head towards the ancient citadel of Medinat Muskawoon, which lies in the middle of the so-called 'Skysea'. Apparently, this is a river of glass created from the heat of the original battle 1,000 years ago when Martek captured Khalitharius. The final Star Gem is apparently located somewhere in the city, and there is supposed to be a way to use all five of them to gain access to Martek's Sphere of Power; this can then be used to get rid of the Fire Lord once and for all.  As they travel, they see signs of combat between Khalitharius and the Djinn they released to cover their backs while they search for the last gem. P
3 comments
Read more 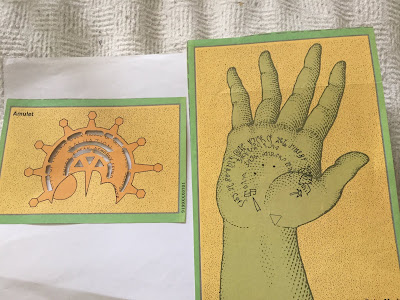 Sir Blanque - swordsman and handsome, dashing noble half mer-person Marion - stabby stabby dagger specialist; Nihrain who currently carries the Runestaff Destiny - Menastrai sorceress covertly raised on Melnibone Bomilcar - Weeping Waste nomad from a chieftain's family Campaign Narrative The four characters have just returned to the Oasis of the White Palm after rescuing Princess Shadalah from the powerful Fire Lord Khalitharius. They accomplished this with some aplomb, hardly coming across anything until the final encounter with the giant Efreet, who fled rather than confront them due to an enchanted amulet the group was carrying. They didn't know this at the time, but the route they took through the Crypt of Bard Al-Mosak to find the princess allowed them to avoid several powerful undead under his command; at one point there were five wights waiting for them in the same room. Now back at the Oasis, they lay the amulet over the markings on the princess' palm: The
2 comments
Read more
More posts

Caliban
I have been gaming since school, moving from historical figures gaming through role playing and back again. I decided to Blog after being persuaded by some friends that it's time I joined the digital age properly. The plan is to showcase various goings-on in my gaming life and keep it updated as much as I possibly can, barring work and real life. Speaking of which - now that I have been on Bogger for a while - I have decided to expand my blogging acxtivities to my work life as well.

Blogs of a Similar Flavour to this one