The Dam in the Hills

Bomilcar - Weeping Waste nomad from a chieftain's family
Campaign Diary
... Or, rather, a ruined dam. As the characters continue towards the hills to the north of the lakes area of Menastree, they continue to see evidence of the devastation wrought by the flood waters. Mostly, the signs are petering out, but there is one main river valley running through the hills that seems to have channeled the waters into a forceful flow northwards, overbearing the natural current of the river itself. The remaining force of the wave must have hit what was previously a dam, but since the flood came from the wrong direction, the combination of the original lake behind the dam and the momentum hitting it from the other side has obviously caused the dam to burst. 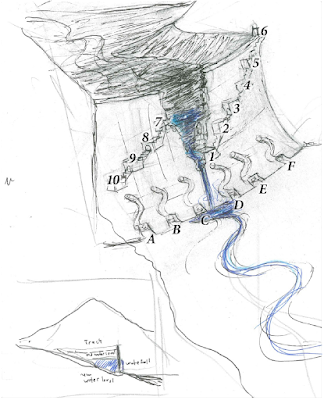 From Deep Carbon Observatory
The four adventurers stop to have a think. The cliff faces to either side of what is left of the dam look really dangerous. The waters have made a lasting impact, and the areas to both sides of the dam walls as they abut the hills look unstable, to say the least. Even several days after the cataclysm, everything is slippery, not to mention crumbly as well where the natural rock has been hit and eroded by the sudden waters.
At the foot of the external wall of the dam itself are located half a dozen sluice gates. Sir Blanque reckons they are designed to relieve pressure from the original lake that would have been behind the dam whenever necessary. Another golem-type construct of the kind they encountered on the way here is kneeling in an abject posture almost of prayer at one of the sluice gates. Embedded in the golem's chest is a large polyhedral stone that seems to match the locking mechanism on the large gate to the sluiceway. "Messing with constructs is a bad idea," mutters Bomilcar. "Who needs to anyway, when we have good old earth elementals?" replies Destiny.
The earth elemental heaves open another gateway for the characters, enabling them to travel upwards to a ledge on the other side of the dam - which was originally on the inside. This places them at a point below the rooms numbered 10-7 on the umpire's map (above); the characters are just about able to see where room 7 links to the main central crack in the dam. Marion uses her grapple to string a line to the opening into that room (very useful, this is - it has an earth elemental bound into it for strength) and the group very carefully climbs to that room, effectively walking their way there in a sort of oblique reverse rappel. They find a stairwell descending inside the dam walls themselves towards the west cliff face. Shrugging, Bomilcar leads the way. "There has to be a reason for this staircase being here," he says.
The characters ignore everything they find in the rooms except the final one, marked 10 on the map. They really are single-minded. In room 10 they find a series of twenty iron jars, each a meter high. the jars are wrapped in ancient iron chains, leading to a pillar in the centre of the room with a large puzzle lock to an enormous padlock. Faint sounds of scratching can be heard from within the jars. On the other side of the room is located a door made of what looks like black iron.
Destiny decides that the padlock is an appropriate challenge to someone with her skills and interest in picking locks, so she sets to work. The rest of the characters aren't too happy about this, given the weird noises coming from the jars, so they position themselves, weapons at the ready, between her and the jars as she does her thing. A series of impressive skill rolls later (including a Critical Success) sees the chain fall to the floor, and the jars all burst open to reveal small creatures. Vaguely humanoid, the ghouls have wasted bodies with long hair plastered against their skin. Destiny fries a few with a fire elemental, and the rest flee towards the door at the other end of the room, smashing through it with little regard for the damage this does to their undead flesh. The things flee via a path on the cliff face that leads to the lands beyond the dam.
Campaign Diary

Popular posts from this blog

December 23, 2017
My gaming life has gone in waves. Before I moved to Cheltenham, I was mostly running a very long term ancients figure wargaming campaign. However, two years later I still have to find a group that suits me, both in terms of time and location. I have visited a couple of clubs, but neither worked for me. A long time ago, I ran a very successful series in the world of Moorcock's Elric, using a whole range of printed scenarios and campaigns - basically, whatever was available for any system. I still have fond memories of those games, and I hung onto my library of rulebooks and supplements with the vague thought that they might one day come in useful again. My kids have never really been interested in gaming, apart from computer and video games, but I suppose I should count myself lucky, since none of them is hooked on violent games. Now, though, they want to try proper role-playing, so I have dug out my old fantasy RPG materials. The campaign starts in Ilmiora, with a series of e
Read more

The Halls of Tizun Thane 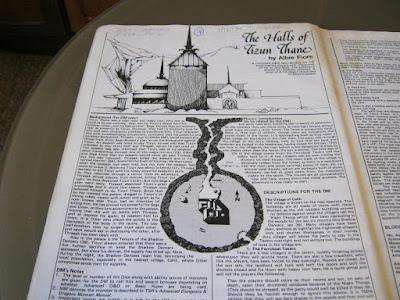 This is a scenario from the early days of White Dwarf . It delineates a very large mansion that has fallen on bad times due to the demise of its owner; various groups are trying to take over the place. It is located on an island in the caldera of a (presumably) extinct volcano. I have integrated it into the campaign as the demesne of a missing senator from the Consortium of Ilmar, or rather what's left of it after all of the recent shenanigans. The party journeys northwards to find out why Thane hasn't been seen for several months. Bomilcar is now rested and back to normal, and the following narrative mostly follows his viewpoint. My comments as umpire are interspersed where appropriate. Jorthan leads the group due to his social status in Ilmiora. Bomilcar's narrative The five of us ride northwards to the lands of the scholar Tizun Thane, who many think is probably a sorceror. He has not been seen since around the time the raiding party landed in the area north of Ilm
Read more

Caliban
I have been gaming since school, moving from historical figures gaming through role playing and back again. I decided to Blog after being persuaded by some friends that it's time I joined the digital age properly. The plan is to showcase various goings-on in my gaming life and keep it updated as much as I possibly can, barring work and real life. Speaking of which - now that I have been on Bogger for a while - I have decided to expand my blogging acxtivities to my work life as well.

Blogs of a Similar Flavour to this one